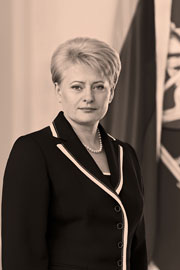 Date and Place of Birth
March 1, 1956 in a worker’s family in Vilnius

Professional Qualifications
Economist, graduated A.Zhdanov University (Leningrad, Russia) in 1983 as lecturer of political economy
Ph. D. thesis defended at Moscow Academy of Public Sciences in 1988; an academic degree of Doctor of Social Sciences granted by the Council of the Academy of Sciences of Lithuania in 1993
A special program for senior executives at Georgetown University (Washington DC) in 1991

Political, Public, Professional, and Cultural Engagement
Head of Agriculture Division, lecturer at Department of Political Economy in Vilnius High Party School, 1983–1990
Secretary for Science at the Institute of Economics, 1990–1991
Program Director at the Government Office, 1991. The same year, she was appointed Director of the European Department at the Ministry of International Economic Relations
Director of the Economic Relations Department at the Ministry of Foreign Affairs, 1993
Appointed Extraordinary Envoy and Plenipotentiary Minister at the Lithuanian Mission to the EU, 1994
Plenipotentiary Minister at the Lithuanian Embassy in the USA, 1996–1999
Vice Minister of Finance in Prime Minister Andrius Kubilius’ Office, 1999
Vice Minister of Foreign Affairs, 2000
Minister of Finance in Prime Minister Algirdas Brazauskas’ Office, 2001
The Cross of Commander of the Order of the Lithuanian Grand Duke Gediminas, 2003
Nominated by the Republic of Lithuania to the European Commission where she was appointed Commissioner for Financial Programming and the Budget, 2004
Named the Commissioner of the Year for her “unrelenting efforts to shift EU spending towards areas that would enhance competitiveness such as research and development”, 2005
Elected President of the Republic of Lithuania in the first round on May 17, 2009

Party Membership
Member of the Lithuanian Communist Party, 1979–1988
Nonparty since 1990