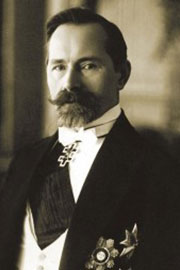 Political, Public, Professional and Cultural Engagement
Bank clerk in Žemės ūkio bankas, 1902–1917
Participant of the Great Seimas of Vilnius, 1905
Memberof the Central Committee of the Lithuanian Relief Society for helping victims of the war, 1914–1918
Participant of the Lithuanian Conference in Vilnius, 1917
Head of the Lithuanian Council, later of the State Council, 1917–1919
Signed the Lithuanian Independence Act on February 16, 1918
Became the first President of the Lithuanian State on April 6, 1919
Lecturer of ethics, ancient philosophy and Lithuanian stylistics at the University of Lithuania, 1923–1927
Vice-Chairman of the Board of the International Bank; founder and one of the leaders of a number of societies and companies, 1924–1940
Elected to the 3rd Seimas, 1926
Published and edited a number of periodicals; publicized original and translated works on philosophy and other research papers

After Term of Office
The term was aborted by the Soviet occupation in 1940; therefore, Smetona moved West and settled in the USA
Died in a fire under mysterious circumstances in Cleveland, USA, on January 9, 1944