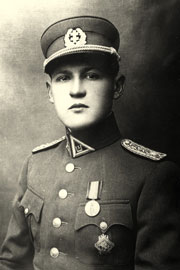 President of the Struggling Lithuania

The last statement by Jonas Žemaitis in Court:
“I, as well as the followers of mine, think that the Soviet Union with the armed forces invaded our country. I consider this behavior of the Soviet government unauthorized... All underground activities against the Soviet Government a participant of which I was I consider right and not illegal. I just want to stress that as much as I commanded the Lithuanian Movement for Freedom I made every effort to keep to principles of humanism. I didn‘t allow any brutal activities. I know what the sentence of the court will be. I still believe that the struggle I have led for nine years will bring its results”. (Gaškaite-Žemaitienė N., The President of Those Who Perished, Vilnius, 2007, p. 405–406.)

Date and Place of Birth
March 15, 1909, in a civil servants family in Palanga

Professional Qualifications
1926–1929 Officer studies at Kaunas War School
1936–1938 Advanced training at French Artillery School in Fontainebleau. The rank of Captain, commissioned upon the completion of courses

1938–1940 Officer of the Lithuanian Army
1944 and later Actively engaged in the activities of the Lithuanian Territorial Defense Force created in the Nazi-occupied Lithuania; later, during the second Soviet occupation, got actively involved in the anti-Soviet resistance movement
April 23, 1945 Took the oath of a partisan and became the commander of Žebenkštis Unit Headquarters
May 1947 Became Chief of Kęstutis District
1948 and later In command of the entire Western Lithuania Partisan District. Chose a code name of Vytautas. Actively engaged in combining the efforts of all the guerilla resistance movement squads which in 1949 united into a single organization – the Movement of the Struggle for Lithuanian Freedom
February 16, 1949 Signed the Declaration adopted by the Council of the Movement of the Struggle for Lithuanian Freedom. The Declaration stipulated that the supreme authority in Lithuania was the command of the partisans which aimed at the restoration of the independent Parliamentarian Republic of Lithuania. Jonas Žemaitis was elected Chairman of the Presidium of the Council of the Movement of the Struggle for Lithuanian Freedom and was granted the authority of the supreme commander of the political and military forces in the country. He was awarded the rank of a general of partisans freedom
fighter

In Presidential Office
February 16, 1949 – November 26, 1954
May 30, 1953 Betrayed and arrested, later transported to Moscow. Under interrogation abode by the oath given to the State of  Lithuanian
November 26, 1954 Executed in Butyrka prison in Moscow
On March 12, 2009 the Seimas of the Republic of Lithuania recognized Jonas Žemaitis as the head of the state of Lithuania struggling against the Soviet occupation, who de facto served as the acting President of the country.